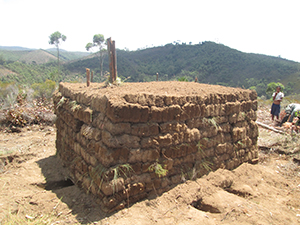 In Madagascar, more than 95% of energy needs - excluding transport - are covered by fuelwood (FW). Around Antananarivo, the resource comes primarily from 150,000 ha of mono-specific eucalyptus plantations (mainly E. robusta). However, these > 50 years old, overexploited plantations, located on nutrient-deficient ferralitic soils (particularly in P and K), are low-yieding (< 5 m3 ha-1 year-1 on average). They no longer meet the needs of the capital, Antananarivo, and its surroundings (annual per capita consumption: 104 kg charcoal and 270 kg firewood in urban areas; 91 kg charcoal and 513 kg firewood in rural areas). In addition, traditional carbonization techniques with very low gravitational yield (≈ 12%) and the use of traditional open cook stoves with low energy efficiency increase the deficit in fuelwood, leading to reducing coppice rotation duration (< 2 years) and harvesting of natural forest remnants.

In this context, the ARINA project, within the framework of the EU-EFD ASA programme, promoted, through a participatory and inclusive approach, simple and effective practices, easily reproducible by the stakeholders, and set up a communal governance of the FW sector, interacting with the Forestry Administration. Activities were carried out in 2 municipalities for the reforestation activities, 4 municipalities for the charcoal production and 2 municipalities for the production of improved stoves, located in the Analamanga region, surrounding Antananarivo.

The project exceeded its objectives with 1) the establishment of 31 rural nurseries that produced 3,376,000 seedlings, 2) the establishment of 2,590 ha of rural plantations of Eucalyptus and Acacia, in monoculture or mixed-species stands, with fertilization (120 g NPK 11-22-16 tree-1) applied at planting on 54% of the afforested areas; such fertilization led to a stem height of 1-year-old trees > of that of unfertilized 2-year-old individuals, 3) The training of 1935 charcoal producers in improved carbonization techniques which doubles the carbonization gravitational yield (≈ 24%), and 4) the training of 54 craft producers of improved cook stoves, for a production of 32,800 units. Six « Comités Communaux de Bois Energie » (Communal Committees for FW », communal sub-commissions, have been set up in the municipalities concerned by the reforestation and carbonization activities, following close dialogue with all the stakeholders of the FW sector. These committees have ensured, in relation with the project team, the implementation and monitoring of activities, and are a guarantee of sustainability of actions after the end of the project

Contribute to poverty alleviation and preservation of the natural environment of the Anjozorobe region, through support for rural populations along the fuelwood chain (FW).

- Support and sustainably strengthen the organisational capacities and the potential of stakeholders production in the FW sector (farmers' organisations, producers,...). The target groups were the municipalities, local associations, Forestry services, Land services, and CCBE. The final beneficiaries were the small forest owners and operators, nurserymen, forest planters, charcoal producers, producers of improved stoves, and FW consumers.

Project Coordination from November 2017 to August 2019

In charge of the afforestation site characterization and silviculture of plantations

email : This email address is being protected from spambots. You need JavaScript enabled to view it.